All of us recognize instinctively that we are now beyond simply managing dramatic change; we are learning to respond to a perpetual acceleration in the pace of change. If the experts’ calculations are accurate, in the next 25 years we will likely experience 100 calendar years of change. We have entered into a prolonged migration of testing, learning, and adapting that is faster than the ability people have to assimilate it.

What may be less obvious is a plate shift taking place underneath the surface level buzz of everyday life. It is there, as we have witnessed, where many instruments of our government, culture, economic, and political system are fundamentally realigning in character and purpose, authority, impact, and connectivity. Many now argue that a new consciousness is taking hold; the result of collective yet seemingly unrelated phenomena unintentionally conspiring to produce continuous fallout. One layer at a time, the crust of the old has been pealed back by a steady succession of occurrences that can be viewed as nothing less than transformational.

We can see the shift in the instinctive reciprocal transfer of social, cultural, and philosophical ideas between Western nations and the developing world. The unprecedented resettlement of people, resources, and technology has produced a convergence of markets and commerce, governing institutions, and national cultures along with their beliefs and behavioral norms. The new interdependency that has resulted is our greatest hope and the most concerning liability.

The era of technological seduction and dazzling gadgetry has given way to a new equilibrium between invention and experience. Innovation is moving us on to greater meaning and human connectedness. The challenge for all of us, and business particularly, will be to harness the right proportion of technology as a tool to deliver the greater meaning that much of society now seeks.

However, unencumbered economic opportunity is essential. Business, rightly so, cannot justify investments in more responsible and sustainable practices if there is not substantiated (measurable) value creation. Such value comes from enhanced sources of revenue, improved margins out of greater productivity and process efficiencies, better resource utilization ratios, and risk mitigation strategies that strengthen resiliency and operational agility.

In the U.S., admittedly, special interest operatives are being paid handsomely to uphold the entrenched prerogatives of a certain few who are too big to change; too invested in the old paradigm of capitalism to risk transformation. On the bright side, there is an emerging new class of courageous citizen CEOs who are redefining the notion of values-driven competitiveness with business models that are bringing about a more unified and responsible notion of global capitalism.

Conscious Leadership is Central to What Matters Most
Today the traditional, artificial distinctions between constituencies have been swept away. Products and services are becoming essentially commodities with fewer intrinsic qualities to distinguish them. Politics is pop culture and aspects of our culture are ever more politicized. 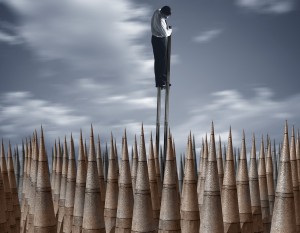 The path to transformation is not for those deficient in the fundamental trait of personal courage. A new expectation for accountability has engendered a resiliently punitive mindset on the part of the American public, consumers, and corporate watchdogs; each uses an array of criteria or attributes to form their perceptions. Judgment is rendered more from how an organization behaves than what it promotes (preaches). When an organization’s internal or cultural reality diverges from stakeholder expectations, dangerous gaps emerge bringing risk and liability. For organization leaders and their boards, the fear factor of accountability from their own constituencies is now on par with that for regulatory and legal forces.

It is time for leaders who truly see themselves as one of the ‘next generation’ to move on from the false confidence that comes from sticking with neck-deep allegiances to the cultural traditions and assumed (‘tried and true’) way of doing things. That approach only produces so-called ‘solutions’ to problems that use the same strategic framework in which they were created!

To be successful now, smart leaders will need to challenge conventional wisdom by redefining what it means to be competitive while also creating lasting value for their organizations and all stakeholders. They must respond to changed expectations by reshaping their business models and practices in order to better align their pursuit of profitability with public interest values. One way forward is to operationalize their values and beliefs into deliberate, executable strategic acts or behaviors (including those of partners and suppliers, for example). Such behaviors will then need to be benchmarked against performance criteria and metrics for their impact upon value creation.

Leaders must cultivate a culture that can withstand the impact of situations they cannot directly control – recalibrating the balance between short-term self interest and the longer-term common good of the whole. Organizations cannot perpetuate success if their holistic context (market, industry, economy) is not healthy. Viability of the whole is critical to advancing the ambitions of any singular enterprise; organizations attain peak performance when trust is high and constraints are low.

Indeed, perpetuating value creation requires a bias toward identifying and capturing the inherent regenerative, or sustainable, characteristics of every situation. It’s a way of approaching competitive opportunity with a sensibility for mutual gain rather than a hoarder’s “winner take all”.

Well exercised leadership can be a powerful mobilizing force; a management asset that ensures an organization’s mission viability, competitive durability, and perpetual prosperity. Nothing less will do. For if you fail to model what you stand for, you open up to others the opportunity to define who you are. AS